Okay, Marisa. You can do this. I coach myself as I begin my first Standards-Based Grading. Just be honest. Be consistent. And be smart.

My first experience with Standards-Based Grading is with my students’ Character Symbols, an activity I created to help students make inferences for characters in Hunger Games.

I had such a tough time grading these! I wanted to push my students to think deeply–go beyond the obvious! Yet I ran into difficulties, for example, when a student used a bottle of alcohol to represent character Haymich. This was a logical and relevant symbol, yes, but when their explanation of the symbol was ‘Because he drinks,’ I felt that students weren’t really making inferences. They were choosing evidence directly stated in the text.

When I considered the different levels of proficiency: Far to Go (1), Not Proficient (2), Proficient (3), Mastery (4), a symbol of a beer could be proficient, but only based on the student’s explanation. Thus I began grading examples like this as a 2.5, almost to proficiency, but not quite there yet.

A Mastery level, however, was going beyond the obvious–selecting a symbol that challenged the norm, that was deeper, or well thought out.

Here are some of my student examples, 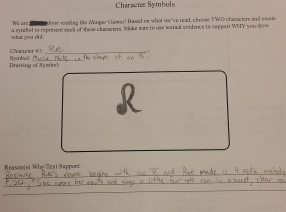 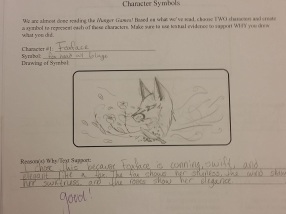 Another great student example–going beyond the obvious. 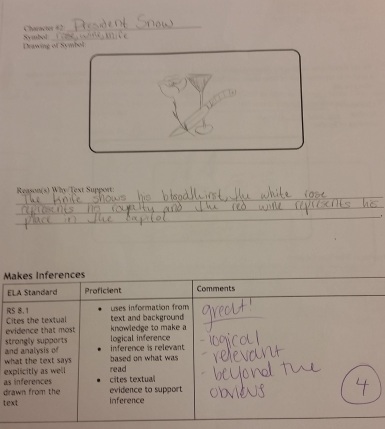 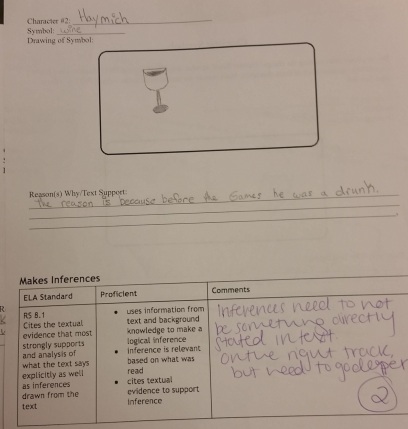 Here is an example that sits right on the Not Proficient/Proficient category. After thinking hard about this example and ones like it, I decided to give a 2.5 and write detailed feedback to help the student moving forward.

As I reflect on my grading process, I now know that I need to focus on what it is that I want the students to grasp. Then consider what proficiency is–Do the students understand? Are the proficient in the standard?–and grade towards that standard. I think the hardest thing is to eliminate past notions of grading. A ‘2’ or ‘Not Proficient’ is not equal to a ‘C’. I need to throw those ideas out the window and think of proficiency. Is this student proficient or not?

One thought on “Assessing Character Symbols”